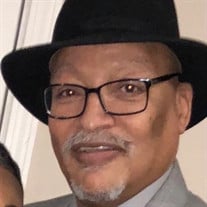 Our beloved Credell Reynolds Jr. passed away peacefully on September 16, 2021 with his family by his side. Credell was born on January 29, 1954 in Chicago, Illinois to Credell Sr and Elzady (Wilson) Reynolds. He graduated from George Washington Carver High School in Chicago Illinois in 1973 and attended Northern Illinois University. Credell pursued a career at the United States Postal Service for 32 years before retiring in September, 2012. On December 22, 1984, he married Karen D. McClam, and from that union they had two daughters, Tianna and Devonna. Credell also had a son Credell III from a previous marriage. Credell played basketball at George Washington Carver High School for four years and he played at Northern Illinois University for one year. Credell LOVED all Chicago Sport teams except for the Cubs!! Credell had an array of passions including Model Trains, Model cars, bowling, Invicta watches, Sport Team Jerseys, and his signature Fedora Hats. After retirement Credell’s passion was his Corvette. He joined the Atlanta Corvette Society which he was a member of until he passed. Credell was known for his wicked sense of humor and loving genuine persona. Credell had an infectious personality which awarded him many friends. Credell was considered a second dad to many family and friends. Credell was preceded in death by his father, Credell Sr, his mother, Elzady and his sister Nettie Broadway. He is survived by his loving, faithful wife and partner Karen, his three children, Credell III(Rhonda), Tianna (Jason), and Devonna (JaVonne). Seven grandchildren, Brenden, Jaylen, JaCoby, Ayedin, Jasmyn, Journee and Kayden. His siblings, two sisters Deborah Hubbard (James who preceded him in death) Marchelle Reynolds, one brother Emanuel (Rebecca) and one Nephew/Brother Alexander (Meloney). Mother in-law Diana McClam, five sister in-laws, Jeanette, Iris (Melvin), Muriel (Darryl), Donna and Monique(Mike). Two brother in-laws James Jr.(Connie), Edmund and a host of nephews, nieces, cousins and friend https://vimeo.com/610981815

Our beloved Credell Reynolds Jr. passed away peacefully on September 16, 2021 with his family by his side. Credell was born on January 29, 1954 in Chicago, Illinois to Credell Sr and Elzady (Wilson) Reynolds. He graduated from George Washington... View Obituary & Service Information

The family of Credell Reynolds created this Life Tributes page to make it easy to share your memories.

Our beloved Credell Reynolds Jr. passed away peacefully on September...

Send flowers to the Reynolds family.