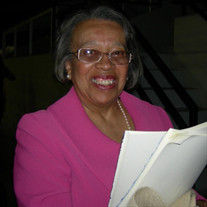 Not sure what to send?

Constance Gail Woods Woodruff was an engaging, caring, and affable person. Born and raised in New York City, the only daughter of Wesley and Doris Woods, Gail, as friends and family called her, achieved her education and earned degrees from Brooklyn College to work with special needs children. While at Brooklyn College, Gail became a member of the Alpha Kappa Alpha Sorority, Incorporated, where she made lifelong friends. Gail married Fred Woodruff in 1958 and moved to Arlington, Virginia while he completed his army service. There, she worked at the Library of Congress assisting in research. Gail and Fred returned to New York in 1961 where their daughter, Michele, was born. Shortly thereafter, Gail began her career in education with the New York City Board of Education as an itinerant speech teacher. She was later assigned as a supervisor for a Brooklyn Speech Center. During this time she earned her Master’s Degree from St. John’s University. In 1986, Gail became a principal at PS 77, a school for autistic children, and remained there until 1991 when she retired, completing 33 years of service. Following her retirement, Gail and Fred moved to join Michele and her family in Georgia. She continued her life’s passion as a child advocate by volunteering with Court Appointed Special Advocates (CASA), a national organization that supports and advocates for children who are in foster care or have experienced abuse or neglect. Gail served and engaged enthusiastically in the Episcopal Church throughout her life. In NY she was active in Saint Martin’s Episcopal Church in Manhattan and Grace Episcopal Church in Queens, as well as St. Matthews in Georgia. She fulfilled leadership roles, often with youth groups, and participated consistently in the work of these churches and with the Union of Black Episcopalians. She was also a Lay Eucharistic Minister and was inducted into a Chapter of the Daughters of the King. Gail loved to travel; she vacationed throughout the Caribbean islands, Europe, Canada, Asia and Africa. She, Fred and friends sailed on jazz cruises for nearly two decades. They loved jazz music and musicians. In her free time, she loved to entertain and socialize and was a member of a book club, played bridge, and attended concerts and theater. She kept in touch with friends all over the United States. Gail was devoted to, and proud of the accomplishments of her daughter and son-in-law, granddaughter and great grandchildren. She leaves to mourn her daughter, Michele (Jon) Williams, granddaughter Kristen (Nick) Williams-Gil, great-grandchildren, Karis and Camden Gil; niece, Natalie Woodruff, cousins and many beloved friends whom she counted as family.

Constance Gail Woods Woodruff was an engaging, caring, and affable person. Born and raised in New York City, the only daughter of Wesley and Doris Woods, Gail, as friends and family called her, achieved her education and earned degrees from... View Obituary & Service Information

The family of Constance Gail Woodruff created this Life Tributes page to make it easy to share your memories.

Constance Gail Woods Woodruff was an engaging, caring, and affable...

Send flowers to the Woodruff family.