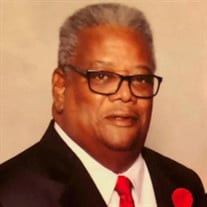 Charles Douglas Alexander Sr. was a caring, loving, generous husband, father, grandfather, godfather, brother, uncle, cousin, and friend. He was born on August 31, 1939, in Hackensack, NJ to David and Frances (James) Alexander. He answered the Master’s call 8:30 AM on January 30, 2022. Charlie was a longtime Bergen County, New Jersey resident who attended Ramsey High School. He left school at age 16 to help support his siblings after his mother’s tragic death. Charles joined the Army and was stationed in Texas and Korea. He later joined the Reserves and was honorably discharged on February 28, 1966. Charles married Emma Lee (Murphy) Alexander on August 24, 1962. Charles and Emma had a blessed life. From this union, they had three children: Charles Jr, Michele, and Melinda. Although Charles did not graduate from high school, he believed in education and encouraged his children and grandchildren to obtain a college education. Charles was a man of God and knew he was blessed and highly favored. He was baptized at Mount Bethel Baptist Church in Ridgewood NJ. He was a faithful parishioner and served on the Trustee Board for many years until he moved to Atlanta. Charles worked tirelessly to become a successful businessman. He was an insurance agent for Prudential and Allstate. He owned a convenience store, a bus company, a restaurant and had several investment properties. He was a senior account executive with Allstate Insurance Company in Ramsey, New Jersey. In his 30-year tenor with Allstate, he received numerous awards including Leading Sales Agent, Life Millionaire’s Club, and Chairman’s Inner Circle. Charles was often included on world-wide lecture tours sponsored by the company. Charles was a valued community member. He shared his time and expertise as a board member of the United Way of Bergen County, One Hundred Black Men of New Jersey, the Englewood Social Club, the Bergen County Junior Football Association, the Glen Rock/Ridgewood Boy Scout Council, the Ridgewood YWCA, the Oziel Grand Chapter of the Order of the Eastern Star, and the Kiwanis International Foundation. Upon moving to Johns Creek, GA in 1996, Charlie joined Hopewell Baptist Church in Norcross, GA where he worshiped and served until his passing. He enjoyed many experiences at Hopewell including a trip to the Holy Land where he was baptized by Pastor Sheals. He took pride in being a graduate of the Radical Love Ministry. Although Charlie was a remarkably busy businessman, he still took time to attend his children and grand-children’s events, travel extensively across the world, watch his beloved NY Giants, and play his favorite hobby, golf. He loved to sing and dance; his favorite songs were “Jesus is Love” and “God Bless the Child Who Has His Own.” His favorite sayings were “Do what you have to do.” and “Only the strong survive.” He loved Psalm 103: “Bless the Lord, O my soul; And all that is within me, bless His holy name!” Charles is survived by his loving wife of 59 years, Emma (Murphy) Alexander; his children: Charles Alexander, Jr. (Yolanda), Melinda Alexander (Eric); grandchildren: Charles Alexander, III, Briana Alexander (Kalief), Christopher Alexander, Troy Sawyer, and Trinity Sawyer; great-grandson, Kameron; brothers: James and Thomas Alexander; and sister Carrie Wright; children of his heart: Adrienne Alexander and Trent Sawyer; Papa/ Uncle Charlie also has a host of Godchildren, nieces, nephews, and cousins whom he loved dearly, who will cherish his memory for years to come. Charles is predeceased by his parents: David and Frances (James) Alexander; his daughter Michele Alexander; grandson Chase Alexander; sisters: Mattie Belle Jackson, Mary Young and Judith Evans; and brothers: Grover, Cleveland, David Junior, Robert, and Herbert. Service entrusted to Gregory B. Levett & Sons Funeral Homes & Crematory; Lawrenceville; 770.338.5558

The family of Charles D. Alexander, Sr. created this Life Tributes page to make it easy to share your memories.