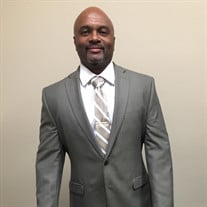 Cephas Laval Brooks was born on November 8, 1962 to the late Cephas Eugene Brooks and the late Johnie Mae Profit in Deerfield Beach, Florida. He attended Deerfield Park Elementary and Deerfield Beach Middle schools. He was a member of Bethlehem Missionary Baptist Church under the late Reverend W. J. Ford where he served on the Jr. Usher Board. Cephas graduated from Deerfield High School, where he was an excellent student and an outstanding athlete, especially in football. In lieu of accepting any of the various scholarship offers, he joined the U.S Army in 1980. Cephas served in the Army for 8 years as an electrical engineer. He met his wife, LaRuth, while stationed in Korea and they’ve been inseparable ever since. Upon discharge from the Army, Cephas held various positions or consulting assignments as an engineer or technical project manager with companies such as GE, Lucent, BellSouth, Cox Enterprises, GPC, Conduent and most recently Fiserv. He enjoyed his work, although he sometimes considered it a “necessary evil” for what he envisioned upon retirement. Cephas loved fishing, hunting, cooking, traveling, spending time with family and friends but most of all his spoiled wife. He was a man of many talents, no honey-do-list was too large or impossible nor was any new technology. If he couldn’t do, he would research and research until he could do it and would do it well. Cephas is preceded in death by his mother, Johnie Mae Profit; his father Cephas Eugene Brooks and sister, Kell Michel Brooks. Cephas leaves behind a loving wife of 35 years, LaRuth Brooks, daughters Shaniqua Laquell Brooks & Brittany Alexis Brooks, sons: Michael Anthony Brooks & Tyler Brooks, sisters Bonnie Brooks-Hall (Richard), Juanita Lucas (Melvin), Shirley Amerson, Betty Jo Maxwell (Edward) and Harvey Ann Harvin; brothers Mac Peterson, James Brooks (Melody), Michael B. Brook and Michael J. Brooks. Three grandchildren: Elijah Cruz, Adonis Miller and Apria Miller. Five sisters in-law: Anita Terry (Ashley), Portia Wansley, Sarah Wansley, Richetta Robinson, Sylvia Mathews (Michael) and one brother in-law, Richard Steele. One Aunt, Ize Moe Legette out of Sacramento, CA. Twenty-four nieces and nephews, forty-two great nieces and a host of cousins and friends. A close cousin, Lamar Hazelton. Special friends include Marcus Brooks, Darrell and Priscilla Dalton, Mesheryl and Carlos Wimberley, Art and Catherine Gore, Gwendolyn McKinley and Joe Linton.

Cephas Laval Brooks was born on November 8, 1962 to the late Cephas Eugene Brooks and the late Johnie Mae Profit in Deerfield Beach, Florida. He attended Deerfield Park Elementary and Deerfield Beach Middle schools. He was a member of Bethlehem... View Obituary & Service Information

The family of Cephas Laval Brooks created this Life Tributes page to make it easy to share your memories.

Send flowers to the Brooks family.