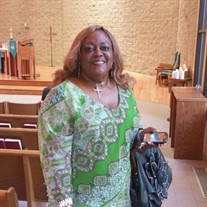 CAROLINE JEANNETTE MATHILDA LAURA GITTENS was born at Maternity Center in Monrovia, the Republic of Liberia, to Albert Charles Gittens Sr. and Caroline Jeannette Dobson-Gittens on February 17, 1953. She wholeheartedly embraced her faith in Christianity at an early age, and the Lord remained her constant source of strength and resilience throughout the many incredible challenges she survived in her life. As a young girl growing up in Monrovia, her personality and love for people brought her many friends and acquaintances. Caroline was rambunctious and protective of her older brother Charles. At times, she even fought his playground battles. Later in her years, the circles of close people she cherished as dear sisters and brothers grew even larger. Caroline attended Bromley Mission, St. Theresa Convent, and B. W. Harris Episcopal High School, where she met her first child’s father, Abraham Benedict Nosike. She received professional training at Leigh Sherman Executive Secretarial School in Liberia and later in the United States studied at the Essex County College in Newark, New Jersey. She worked for the Liberian Government in several capacities, most notably at the Liberia Public Procurement Concession Department and USAID. Caroline was a sharp individual who maintained an interest in public service and social development. She was blessed to experience marriage with her first-husband Mohamed Ibrahim Sheriff and motherhood with her three children in Liberia. Still, as the political condition worsened in her beloved home, she and her family would pass through one of the most difficult times imaginable. John 15:13 says, “Greater love has no one than this: to lay down one’s life for another’s.” Amid chaos, suffering, and war, Caroline held on to her faith to see that her two youngest children Memuna (Iris) and Mohamed Jr. (Poppy), her niece Sunnah (Pinkie), and her aunty Sarah made it out of harm’s way to Ivory Coast and eventually the United States in 1991. They settled in Minnesota, where she reunited with her eldest daughter Candace and brother Charles. Caroline continued her devotion to her family as a single mother while starting life anew. She worked tirelessly to provide and keep a smile on their faces while battling her deeply personal bouts of depression. Her biological children and those she adopted along the way are forever in her debt and precious memories for her many years of struggles. After some time in Minnesota, she reconnected with Christopher Jarrett and remarried. Caroline then moved to Georgia, where she lived for fourteen years and touched the lives of countless individuals until her divorce. Testimonials of Caroline’s ability to encourage loving change in mended relationships, renewed and newly minted connections to the Lord are endless. Caroline had a distinguished personality. She continually caught the morning light before the sun. When she spoke, you felt it in your heart for better or worse. Her “pop” eyes were piercing and unforgettable. And the space she leaves in all of us will eternally remain unfilled. Caroline eventually relocated to Pennsylvania, where she remained in the city of Johnstown until her homegoing on October 8, 2021 While there and in Georgia, she attended several churches including, the Shiloh Baptist Church and Bethel World Outreach, where she maintained her reputation of affecting people’s lives for the better. She’s served as a Sunday School Teacher along with several other meaningful roles in the church. In life, Caroline accomplished her highest calling to be a magnificent mother and soldier for the Lord. She will be eternally missed as our irreplaceable friend, cousin, aunt, Mommie, and angel. Caroline leaves to mourn and cherish her legacy: Candace Lydia Nosike-Hollins (Michael), Memuna Iris Sheriff-Nelson, and Mohamed Ibrahim Sheriff, Jr. (Jewel); her siblings: Charles E. Gittens Sr. (Maria), Albert Charles Gittens Jr., Abiose Gittens-Parker (Pierce), Vashti Gittens-Ponnie (Michael), Lydia Gittens (P. Welleh); Lindsay Gittens; her Grandchildren: Vahid Benedict Rutland; Isaiah Michael Nelson; Candan Michael Hollins; Michael Rinaldo Hollins Jr.; and a host of uncles, aunts, nieces, nephews, cousins and loved ones as well as friends in Liberia and the United States.

The family of Caroline Jeannette Mathilda Laura Gittens created this Life Tributes page to make it easy to share your memories.

Send flowers to the Gittens family.