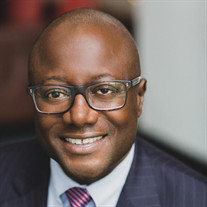 The youngest of nine children, Bret was born and raised in North Memphis, Tennessee by his mother Addie Williams. Since childhood, Bret lived with intention and urgency and had an exact plan for what he wanted to be in the world. Despite any obstacles he faced, he was neither distracted nor deterred from his goals. His mother told him to ask for and go after what he wanted. Bret was a standout in his community from a young age. Everyone who knew Bret, knew there was something special about him. He was an honors student at Central High School in Memphis, where his mock trial team achieved the distinction of winning the statewide high school competition. From Central High, Bret went on to attend Harvard College where he majored in Government. While at Harvard, Bret nurtured his passion for photography and devoted time to community service programs in Roxbury, Massachusetts through his involvement with the student-led non-profit organization Phillips Brooks House. Bret graduated from Harvard College and received his law degree from Stanford Law School. At the time of his death, Bret was an attorney in private practice representing corporate and individual clients in all stages of state and federal criminal investigations, trials, and appeals. In addition to his white-collar criminal law practice, Bret represented indigent defendants through his appointments to the Criminal Justice Act panels for the United States District Courts in the Northern and Middle Districts of Georgia. Bret’s impressive and exemplary legal career spanned three decades. During this time, he served for over 16 years as a federal prosecutor in the United States Attorney’s Offices for the Northern District of Georgia and the Southern District of New York, and also held attorney positions at the U.S. Department of Justice and the Environmental Protection Agency. As an Assistant United States Attorney and throughout his career, Bret won the respect of colleagues, judges, and opposing counsel for his intelligence and collegiality, his tireless work ethic, his unwavering moral compass, and his unflappable demeanor in even the most complex jury trials. Bret had a gift for befriending people. Conversations with Bret came easily, and he could talk to anyone on almost any topic. Bret’s many close life-long friendships transcended differences and are a testament to the fact that he found people he was simpatico with, and he kept them. Bret encouraged others throughout his lifetime to broaden their perspectives and to think critically instead of accepting the status quo. He was also a prolific writer whose articles and op-ed pieces were featured in various publications on important topics – including election laws and voter fraud, Georgia’s Open Carry law, and his opinions on the concept of essential Americanism as a Weltanschauung. After starting his private law practice, Bret was frequently called upon by national and local media outlets to opine on high-profile criminal cases and legal matters. Bret was simultaneously known as the smartest guy in the room and the most humble, and was loved by his family, friends, and colleagues for his generosity, kindness, authenticity, honesty, and sense of humor. Most importantly, Bret was a family man. He was a devoted husband to Stephanie, his wife of 18 years, and a loving and fiercely protective father to their sons Grady and Dexter. Bret was pre-deceased by his siblings Albert, Alaine, Alden and Adam. In addition to his wife and children, Bret is survived by his mother Addie Williams and his siblings Alisa, Alston, Allan and Alex. He also leaves to mourn a host of relatives, friends, and the many people whose lives he touched. Memorial donations in Bret’s name can be made to Erlanger Foundation either by using the link: www.erlanger.org/give or by mail to: Erlanger Foundation, 975 East 3rd Street, B-508, Chattanooga, TN 37403. Kindly place a note in the comment section to direct the gift to the renal transplant or kidney transplant program.

The youngest of nine children, Bret was born and raised in North Memphis, Tennessee by his mother Addie Williams. Since childhood, Bret lived with intention and urgency and had an exact plan for what he wanted to be in the world. Despite any... View Obituary & Service Information

The family of Bret Richmond Williams created this Life Tributes page to make it easy to share your memories.

The youngest of nine children, Bret was born and raised in North...

Send flowers to the Williams family.