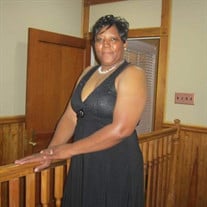 Bertinna Conwell – Macopson was born June 25, 1963 to the late Mr. Jesse Lee Conwell and Mrs. Catherina Ann (Phillips) Conwell in Atlanta, GA. Bertinna grew up in Atlanta ( Mechanicsville, Summer Hill, and Cabbage Town) Communities. She received her education from Atlanta Public Schools ( P.L. Dunbar and Ralph Mcgill Elementary Schools, M.L. King Middle School, and graduated from Hoke Smith High School in Atlanta, Georgia. Bertinna welcomed her first daughter Aerial Conwell in 1983. She was a very proud mom. During the summer of 1983 while working at Stake and Shake on Memorial Drive in Decatur, Ga as a hostess. She met a young man, Alvin Macopson, who was the short rder cook. They dated and he became the love of her life. They were united in marriage on May 24, 1984 and added to their circle of life two more children Shannan (Macopson) Lopez and Alvin Jr. Bertinna, was known to her family and friends as “Tina”. She loved and was a die heart Atlanta Falcon fan, that enjoyed spending quality time with her family and was the life of any party. She also enjoyed traveling, dancing, and attending sports events. Tina, is now with the family that preceded her in death and we believe they would welcome her with open arms and loving hearts. Our angel has gained her wings. Bertinna leaves to cherish her precious memories her beloved husband Alvin Macopson, daughters, Aerial Conwell, and Oscar (Shannan) Lopez, and son Alvin Macopson Jr. Eight grandchildren five grandsons; Christian Jr, Oscar Jr, Makai, Chase and Miguel. Three granddaughters; Naveha, Skyy, and Mia. Four sisters; Angela Sanford, Cecil (Aletha) Clark, Kathelene Conwell, and Kelvin (Felicia) Thomas. Along with a host of other nieces, nephews, cousins, and friends.

The family of Bertinna Conwell Macopson created this Life Tributes page to make it easy to share your memories.

Send flowers to the Macopson family.