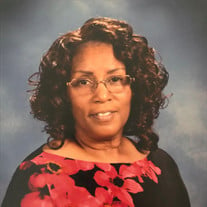 The life of Bernadette Henderson Bernadette (Byrdsong) Henderson of Macon Georgia departed this earthly life on January 16, 2022, at Eastside Hospital in Snellville, GA surrounded by her loved ones. Born in Hartford, CT on July 19, 1950, Bernadette was the beloved daughter of the late Rafer Sr. and Natalie (Clements) Byrdsong. Bernadette attended Hartford High School and was a graduate of St. Francis Hospital School of Nursing. She was employed at Lorraine Manor (Chelsea Place) for over 20 years before relocating to Georgia where she continued to provide nursing care at River Edge Behavioral Health until she retired in 2008. In 1996, under the direction of the Holy Spirit, she was baptized and joined Bethany SDA in Macon, GA. While attending she was a Personal Ministry Secretary, Bible Worker, Sabbath School Teacher and served on the Health Ministry. Bernadette leaves to cherish her memory to a devoted husband of 35 years, Jack Henderson and two dedicated children, who always stood by her side through every storm of life. God blessed her with her only begotten son Dorian Byrdsong, one adoring daughter Selina Joiner, seven (7) grandchildren and eight (8) great-grandchildren. Bernadette was a loving sister to Overseer Rafer Jr. and his wife Pastor Stacie Byrdsong of Enfield, CT, Myron and his wife Valerie Byrdsong of Broadbrook, CT and Andre Byrdsong of Broadbrook, CT and one dear Sister Radine Byrdsong of East Hartford, CT. Bernadette will be affectionately remembered by a loving aunt Rossie (Midge) Bolds, her mother-in law Elizabeth Harper, brothers-in-law Robert F. Henderson and his wife Mamie of Jacksonville, FL and Norman Henderson of Thomasville, GA and two sisters-in-law Johnnie W. and her husband Jerome Charles of Hartford, CT and Sarah Coomey of Metcalf, GA, a beloved Sista-Friend Claudia Redding as well as a host of nieces, nephews, cousins, and friends.

The life of Bernadette Henderson Bernadette (Byrdsong) Henderson of Macon Georgia departed this earthly life on January 16, 2022, at Eastside Hospital in Snellville, GA surrounded by her loved ones. Born in Hartford, CT on July 19, 1950, Bernadette... View Obituary & Service Information

The family of Bernadette Henderson created this Life Tributes page to make it easy to share your memories.

The life of Bernadette Henderson

Send flowers to the Henderson family.