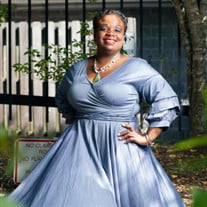 Her Story Arleshia Henderson Little was born on July 27, 1971 to the parentage of the late Raymond A. Henderson and Ruby N. Henderson. She departed this life on Monday, April 25, 2022. She was educated in the Rockdale County public school system. She was a proud graduate of Heritage High School’s Class of 1989. In 2018, she attended the Trimm Institute of Global Leadership’s Kingdom School of Ministry and successfully received her Certification in Ministry. Arleshia grew up in the United Methodist faith and accepted Christ at a young age. She was a member of Bentley Hill United Methodist Church in Stockbridge, GA. As the wife of a pastor, she worshipped under his leadership. She later joined Grace Baptist Church in Stockbridge, GA, where she was a very active member. She served as a member of The Voices of Grace, and the Ladies of Grace Leadership Team. Arleshia truly loved the Lord and looked forward to the joyous worship experience anytime there was a church service. Proverbs 31 states, “Who can find a virtuous woman? for her price is far above rubies.” She was joined in holy matrimony to Reverend Moses Little on August 7, 1992. They were blessed with a total of 4 children. Two were born into the union and two were loved into the union. The love she shared and showed started at home. She was preceded in death by her father, Raymond A. Henderson; her maternal grandparents; Roy and Elizabeth Heard, her paternal grandparents; Frank Henderson and Katherine Goggins, and her step-grandmother; Thelma Louise Henderson. Arleshia has always been an exceptional employee and a very hard worker. She previously worked for McDonald’s and Target before starting her career in banking with Bank South. She worked for BB&T Bank (now Truist) for over 20 years. She was, currently, employed at Synovus Bank in Conyers, GA where she served as the Vice President of the Conyers Retail Market Division. Mrs. Arleshia Little was a very jazzy and classy woman; always presenting the best possible image of herself. She had an infectious smile that was bright enough to light up the darkest of rooms and warm the coldest of hearts. Arleshia was a phenomenal woman. She was very self-less, God-fearing, ambitious, warm, caring, kind, loyal, sweet, and loving to all who knew her. She was very welcoming and was a second mother to all her children’s friends. Arleshia never hesitated to share her knowledge, life experiences, and wisdom with her clients, family, and friends. She gave great godly advice and was very encouraging and supportive. She could meet you wherever you were emotionally and give you precisely what you needed. If there was ever anyone that made her aware of their grim circumstance, she would remind them to keep the faith and that God was always in control. She was funny as well when she shared family memories; especially the ones of her childhood. She would laugh in such a way that you would have to laugh with her. Arleshia had a way of telling the story and it would make you feel as if you were there. She knew her way around the kitchen and was a phenomenal cook and baker. She would prepare large meals to share, and everyone was welcome. She was the woman that gave her children everything because she meant everything to her children. Arleshia was a perfectly painted picture of strength, hope, determination, and love until the very end. She leaves to cherish her memories; mother, Ruby N. Henderson; daughters, Moleshia K. Little and Ava Little; sons, Moses Rashad Little and Moses J. Little; sister, Beverly Banks (Sammy); brothers, Garry Henderson (Kendra) and Raymond E. Henderson; grandchildren, Isaiah Little and Imani Mateen; and a host of other nieces, nephews, cousins, clients, and friends. Celebration of Life Services will be held on Wednesday, May 4, 2022 11 AM at Grace Baptist Church 2178 Hwy 138 East Stockbridge, Ga. 30281. Senior Pastor Clinton D. McFarland. Interment Green Meadows Memorial Garden. Visitation Tuesday, May 3, 2022 from 12-5 PM in our Chapel; from 6-8 PM at the Church. Please express your condolences here on our website. Gregory B. Levett & Sons Funeral Home and Crematory, Inc. ROCKDALE CHAPEL 1999 Hwy 138 SE Conyers, Ga. 30013 (770)285-6673. Please log onto www.gracebaptistatl.org for the Live Stream

Her Story Arleshia Henderson Little was born on July 27, 1971 to the parentage of the late Raymond A. Henderson and Ruby N. Henderson. She departed this life on Monday,... View Obituary & Service Information

The family of Arleshia Henderson Little created this Life Tributes page to make it easy to share your memories.

Send flowers to the Little family.