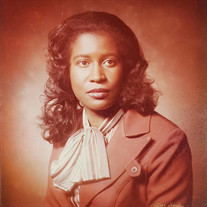 Anna Shannon was born in Ratio, Arkansas on September 20, 1944 to Dove and Ida Frost. She later moved to Saginaw, Michigan where she, along with her husband, raised her three sons. Anna went on to work for many years, later retiring from General Motors Corporation. Anna gave her life to Christ in 1979 at Good Shepherd Church of God in Christ, in Buena Vista, Michigan. She dedicated many years of her life teaching , evangelizing, preaching and witnessing to people throughout the United States. Her frequent message to those she met was , "You can be all that God wants you to be, just trust Him." Anna was a member of Hope and Life Fellowship in Snellville, Georgia until her death. Anna had a huge heart for ministries to women, the homeless and the needy. She was the proud founder of a women's ministry, The Women of Integrity and a homeless ministry, Haven of Rest Community Outreach Center in West Helena, Arkansas. Anna enjoyed watching old television shows, including her favorites, The Andy Griffith Show, Bonanza and Little House on the Prairie and game shows like Family Feud. She also loved spending time with her family and friends and was always ready for a dinner trip to Red Lobster. Anna was preceded in death by her parents and her brother David. She is survived by her sister, Eloise, and two brothers, Robert and Isaac. She is also survived by her three sons, Herbert, Raymond, and Calvin and her daughters-in-law, Michelle, Kristi and Latanya. She also leaves behind her cherished grandchildren, Quentin, Marcus, Brittney, Jasmine, ZaRhia, Briana, Ashanti, Jazmin, Calvin Jr., Elisha, Naja, Rashad and Breha as well as great-grandchildren Breanna, Sariyah, Amari, Marquise and Emery. She also leaves behind many nieces, nephews, godchildren and countless dear friends.

Anna Shannon was born in Ratio, Arkansas on September 20, 1944 to Dove and Ida Frost. She later moved to Saginaw, Michigan where she, along with her husband, raised her three sons. Anna went on to work for many years, later retiring... View Obituary & Service Information

The family of Anna Mae Shannon created this Life Tributes page to make it easy to share your memories.

Send flowers to the Shannon family.