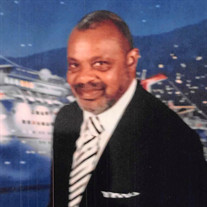 On Sunday January 9, 2022, Andrew Louis Harrison Jr. was called home to glory at the age of 69. He was a courageous man of God who was filled with warmth and kindness. He will surely be missed but never forgotten. Anyone who has ever met him had met a friend. Andrew L Harrison Jr. (Andy, or Harrison, as he was affectionately called) was born on April 28, 1952 in Philadelphia, PA to Doris & Andrew Harrison Sr. (both deceased). His brothers and sisters include Donald Harrison (deceased), Deborah Bright (Alpheus Bright, Jr. deceased), Joan Harrison, Joyce Harrison, Ethelyn Harrison (deceased) and his cousin Robert Clemmons, who was like a brother. As a child growing up in Philadelphia, Andy attended Bethany Baptist Church. Andy was a popular student at Edward W. Bok Technical High School, where he starred as quarterback on the football team. After graduating high school in 1969, he was enlisted into the military. He proudly served his country in the United States Air Force as a Combat Engineer, for 12 years which included a tour of duty in Vietnam from 1970–1971. In 1971, he met a lovely young lady named Carolyn Shuler while based in the port city of Charleston, SC. They married in June 1972 and began a new life as husband and wife. They were married for 49 ½ years. As a professional, he was a forklift operator and an Inventory Specialist for many years and retired in 2011. He loved to travel and take cruises with his wife Carolyn. Andy later accepted Jesus as his Lord and Savior after moving to Atlanta, Georgia. He was a ministry leader for Celebrate Recovery, a faith-based recovery group based on the teachings from the Beatitudes. There he leaves a legacy of love and respect for those he shepherded while on the road to recovery. He was particularly proud of his Volunteer of the Year award he earned while serving at Mercy Seed/New Mercies Christian Church. He was recognized for his Community service at The Georgia State House of Representatives. He also coached youth baseball and football in the Scottsdale community with his youngest son Patrick for several years. One of Andy’s favorite past times was to cheer on his favorite NFL team, the Philadelphia Eagles! He also loved taking his grandkids Maxine and Eric Jr. to baseball and basketball games. He leaves behind his children: Lisa Hughes (Josephus Hughes), Nicole Chanel-Bullock (Roderick Bullock), Eric Harrison (Melissa Harrison), Patrick Harrison. Grandchildren: Maxine, Eric Jr., Leon III, Dominique Rashanda, Keyana, Aaliyah, and Josephus Jr. Andy also leaves a host of loved ones: aunts, uncles, nieces, nephews, great-grandchildren, and countless friends to cherish his memory Please express your condolences here on our website. Gregory B. Levett & Sons Funeral Home Gwinnett Chapel (770) 338-5558. Out of respect for the families wishes, there will be no visitation to the home prior to or after the celebratory services. The Services will be private and by invitation only. Everyone is required to wear a face mask throughout the entire duration of the services. There will be a guest list at the door, so please make sure that your name will be on it prior to arriving. The family requests that all attendees be fully vaccinated. Please be prepared to show proof if necessary. Also, in lieu of flowers, the family request that donations be made to the Disabled American Veterans (DAV) Organization.

On Sunday January 9, 2022, Andrew Louis Harrison Jr. was called home to glory at the age of 69. He was a courageous man of God who was filled with warmth and kindness. He will surely be missed but never forgotten. Anyone who has ever met him... View Obituary & Service Information

The family of Andrew Louis Harrison Jr created this Life Tributes page to make it easy to share your memories.

Send flowers to the Harrison family.