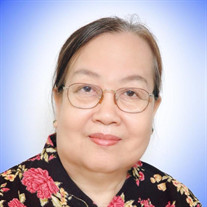 An Hue Truong, 78, of Conyers, GA, passed away September 24,2021. Visitation will be held on Friday, October 1,2021 5-8PM at Rockdale Chapel. A prayer service will beheld will be held 6:30PM on Friday during the visitation. There will also be a visitation on Saturday from 9:30AM to 10:30AM on Saturday, October 2,2021. Celebration of Life will be held on Saturday, October 2,2021 10:30AM at our Rockdale Chapel. Interment will follow at Floral Hills Memory Gardens located at 3150 Lawrenceville Hwy, Tucker, GA 30084. Please express your condolences here on our website. Gregory B. Levett & Sons Funeral Home and Crematory, Inc. ROCKDALE CHAPEL 1999 Hwy 138 SE Conyers, GA 30013 (770)285-6673. ******MASKS ARE REQUIRED TO ENTER THE BUILDING******* Evangelist An Hue “Grace” Truong of Conyers, Georgia was born into a Godly family on January 1, 1943 in My Tho, Vietnam to Dau Van Truong and Xinh Thi Vo. The second of six children, she was raised in My Tho, Vietnam, moving to Nha Trang, Vietnam to attend the Nha Trang Bible College in 1973. There she met her beloved husband, Rev. Dr. Trinh Kien Nguyen, marrying in Long Xuyen, Vietnam on April 6, 1975. In 2008, Mrs. Truong immigrated to the United States to live with her son in Texas and joyfully became a naturalized U.S. Citizen in 2015. In 2016, Mrs. Truong relocated to her daughter’s home in Georgia. She entered her heavenly reward peacefully with her children at her side on September 24, 2021 in Conyers, Georgia. Mrs. Truong accepted Jesus Christ as her Lord and Savior at a young age and dedicated her life to His service, as a Consecrated Official Worker with the Christian & Missionary Alliance of Vietnam (South) and the Vietnamese District of the Christian & Missionary Alliance (USA). After her husband’s passing, Mrs. Truong continued to serve as a preacher and teacher. During times of government restriction, Mrs. Truong, as a female minister, had freedom to travel to many areas in Vietnam to encourage and build up the church. A lifelong supporter of education, Mrs. Truong graduated from the Nha Trang Bible College with a Bachelor of Theology and supported many minority youth to attend college. Mrs. Truong had a special place in her heart for the underprivileged and oppressed. She gladly served wherever she was invited, including with several minority people groups and travelling to Cambodia to work with New Hope Ministries. Petite physically, Mrs. Truong was a giant in her family and the church, serving in Christian Education, as a mentor to many, and teaching a Women’s Bible Study virtually when she became homebound. Mrs. Truong leaves to cherish her memories and carry on her legacy her two children: her daughter, Hannah Mytam Brown of Georgia, with her husband, Rev. Stephan Brown, and their daughter Abigail; and son, Kevin Linh Nguyen of Texas, with his wife, Kim Nguyen, and daughters Helen and Becky. She is also survived by her younger siblings, all of Vietnam: brother 5, Tung Thanh Truong; sister 6, Huong Thanh Truong (Mrs. Pastor Hue Thanh Nguyen); and baby sister, Diep Thanh Truong; as well as her dear sister-in-law, Cuc Thi Nugyen (Mrs. Pastor Duoc Van Truong) of Arizona and numerous nieces, nephews, and close friends. She has now been reunited with her dear husband, Rev. Dr. Trinh Kien Nguyen, after 35 years of faithful waiting, as well as her parents, her eldest brother, Rev. Duoc Van Truong, her younger brother, Dung Thanh Truong, and cherished nephew, Thien Loc Truong Nguyen. To honor Mrs. Truong’s legacy, please consider a donation in her memory to: Alliance Evangelical Divinity School 314 S Brookhurst St, Anaheim, CA 92804

An Hue Truong, 78, of Conyers, GA, passed away September 24,2021. Visitation will be held on Friday, October 1,2021 5-8PM at Rockdale Chapel. A prayer service will beheld will be held 6:30PM on Friday during the visitation. There will also be... View Obituary & Service Information

The family of An Hue Truong created this Life Tributes page to make it easy to share your memories.

Send flowers to the Truong family.