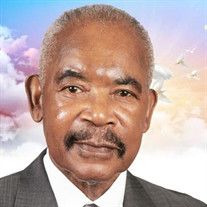 Albert Cornelius Wiggins III was called home on February 10, 2022. Jeepy, as he was affectionately called, was born to the late Dorothy and Albert C. Wiggins II on July 24, 1936 in Boston, Massachusetts. Also, his younger brother, Frederick Wiggins (Walky), preceded him in death many years ago. Jeepy is a Korean War Veteran for the United States Air Force. He entered the military service in l954, and he served as a medic, emergency room specialist and played for 13th Air Force Football. Albert was a retired Accounting Supervisor from the Massachusetts Bay Transit Authority’s (MBTA) Accounting Department since 1999. Prior to this position, he worked on ships radar systems at the Boston Navy Shipyard in Massachusetts before they closed. He also owned and operated a taxi service business for many years. In addition, he has held positions in electronics from General Electric Company, and Transitron Electronics, located in Wakefield, Mass. Shortly after his discharge from the service, he worked at the Veterans Hospital assisting in physical therapy for quadriplegics. He has earned a degree in accounting from Newbury College, Brookline, Mass; and has received certificates of completion from Industrial Technical School for Industrial Electronics in l960, and Wentworth Institute of Technology in Carpentry and Building in l989. Albert was a devoted member of First Baptist Atlanta Church with Dr. Anthony George, Pastor (Rev. Dr. Charles Stanley when he joined). He is a former member of the 12th Baptist Church located in Roxbury, MASS. under the late Dr. Rev. Michael Haynes. He was raised in the Catholic Church as a youngster but converted to Protestant in his later years. Jeepy was a recent author of his book “The Journey of My Life: A Chronological Review of Events Throughout My Years” released October 2021. It is being distributed through bookbaby.com publishing, Amazon, Barnes & Noble and others. He had started working on his second book, before his illness. He leaves to cherish his memory; his loving wife, Dorothy Pressley-Wiggins; children – Elizabeth Wiggins-Smith of Bowie, MD, Stephanie A. Wiggins, Rio Vista, CA., Gregory A. Wiggins (Gerenne), Snellville, GA., Valerie Wiggins, Antioch, CA. Stepson; Ronald W. Pressley (Lisa Marie), Worcester, MA. Grand children: Peter Smith (Krystal), Hyattsville, MD, Jennifer McMillian, Bowie, MD. Crystal Smith, Bowie, MD., Aaron Jamal Wiggins, Koby Wiggins, Snellville, GA. Parker Wiggins-Harrison, Antioch, CA., Samantha Wiggins-Harris, San Francisco, CA. Step-Grandchildren: Rhakym Barton-Pressley, Sommerville, MA., Tamara Burns, Roslindale, MA., Keisha Sibert (Tracy), Temple Springs, MD. And the late Justice Robarts, Niagara Falls, NY. And many, many great grandchildren. Albert has a huge cast of nieces and nephews throughout the United States. is first marriage was to the late Betty Ann Mayo who transitioned to be with the Lord in February 2002. https://vimeo.com/event/1891096

Albert Cornelius Wiggins III was called home on February 10, 2022. Jeepy, as he was affectionately called, was born to the late Dorothy and Albert C. Wiggins II on July 24, 1936 in Boston, Massachusetts. Also, his younger brother, Frederick... View Obituary & Service Information

The family of Albert Wiggins III created this Life Tributes page to make it easy to share your memories.